AVAILABLE FROM OTHER SOURCES 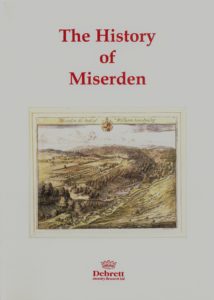 The History of Miserden, Gloucestershire
£18

Compiled by Debrett Ancestry Research as a millennium project for the owner in 2000. Traces the history of the beautiful village and estate of Miserden in Gloucestershire, from the 11th century through to the Wills family who currently own the estate. 95 pages, including photographs, historical maps and pull-out family trees. A fascinating read, especially for those familiar with Miserden. £18 incl UK P&P. Available from the Miserden Estate Office (estate.office@miserden.org) or online via the Miserden website.
https://www.miserden.org/miserden-book-a-history-of-the-village 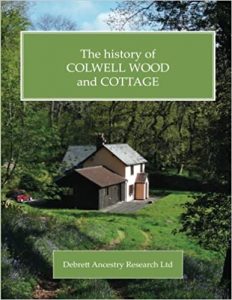 The History of Colwell Wood and Cottage
£24.99

Colwell Wood Cottage stands in a clearing in the heart of Colwell Wood, near Honiton in Devon. The rich history of this small and seemingly insignificant estate has been traced through nine centuries, from the Domesday Book to the present. Like many such estates, Colwell was frequently fragmented and put together again, so the story is a complex one. Generously illustrated and fully referenced, this volume is the fruit of decades of painstaking research. It will be of value to anyone interested in the history of Devon, but above all it demonstrates that no matter how small and apparently humble a piece of English property may be, dig deep and a rich and fascinating history will emerge.
https://www.amazon.co.uk/History-Colwell-Wood-Cottage/dp/1535099143 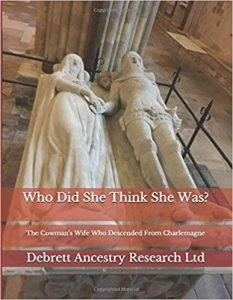 In 1820 a London solicitor’s daughter, Anne Spencer, married a man who was so far removed from her immediate social circle that her father disinherited her. Anne’s husband, William Humphreys, by whom she went on to have nine children, was an illiterate cowman. Anne and her father were probably unaware of just how illustrious their ancestry was. Through a succession of ‘gateway ancestors’, research into the Spencer family history led to a network of titled families, to the royal households of England, Scotland, Ireland, Wales and Europe, and ultimately to Charlemagne and the ancient royal dynasties of Russia and Sweden. This book charts Anne Humphreys’ royal descent through thirteen chapters, including the genealogy of the Spencer, Leigh, Carew, Browne, Fitzalan (or Arundel), Despenser, De Clare, Mautravers, De Warenne and D’Aubigny families. Each chapter is illustrated by a family tree which serves as a visual aid to the narrative.
https://www.amazon.co.uk/dp/B087H9N4PX?ref_=pe_3052080_397514860

This website uses cookies to improve your experience while you navigate through the website. Out of these cookies, the cookies that are categorized as necessary are stored on your browser as they are essential for the working of basic functionalities of the website. We also use third-party cookies that help us analyze and understand how you use this website. These cookies will be stored in your browser only with your consent. You also have the option to opt-out of these cookies. But opting out of some of these cookies may have an effect on your browsing experience.
Necessary Always Enabled
Necessary cookies are absolutely essential for the website to function properly. This category only includes cookies that ensures basic functionalities and security features of the website. These cookies do not store any personal information.
Non-necessary
Any cookies that may not be particularly necessary for the website to function and is used specifically to collect user personal data via analytics, ads, other embedded contents are termed as non-necessary cookies. It is mandatory to procure user consent prior to running these cookies on your website.
SAVE & ACCEPT